As we begin the gallery’s 44th season here in Edgartown, we are grateful to continue to do what we love – share our unique art collection with you. This season will be a busy one as pandemic restrictions relax and people move around a bit more.

We are incredibly excited to announce our 2021 Summer Exhibition with Marjorie Mason. Her 2020 exhibition, “Vineyard Landscapes,” was a complete sell-out, so we anticipate another great collection from Marjorie for this season. As was the case last year, we will not host an artists’ reception but plan to feature her collection on the gallery’s main floor beginning on July 1, 2021, and throughout the summer.

END_OF_DOCUMENT_TOKEN_TO_BE_REPLACED

We are excited to announce our 2020 Summer Exhibitions with Marjorie Mason and William R. Davis. During this period of social distancing, we did not host an artists’ reception but plan to feature their collections on the main floor of the gallery throughout the summer.

Well-known Island artist Marjorie Mason has cultivated a vast following for her work. Each year, her collection delights clients and visitors to the gallery. Whether it is sitting and watching the boats sail by or a stroll along one’s favorite beach, admirers respond to her work. Marjorie captures a fond Vineyard memory for them to take home and enjoy year-round.

END_OF_DOCUMENT_TOKEN_TO_BE_REPLACED

When you hear the name William R. Davis, his historically accurate marine paintings come to mind. And rightfully so, he is one of the leading contemporary marine painters currently working in this country. His success is attributed to his love of art history, understanding his subject through extensive research, while capturing the light and the teeniest of subtle details.

However, since the late 1990s, Davis has also had an interest in painting plein air landscapes. His friendship with fellow artists, Joe McGurl and Don Demers, both well-known landscape painters brought on this interest. The pair would travel around New England to paint outdoors, and Davis, one for always wanting to challenge himself, decided to give painting outdoors a try. Not only did he enjoy being outside and away from the studio, but he also was very good at capturing in the moment the essence of the landscape.

END_OF_DOCUMENT_TOKEN_TO_BE_REPLACED

On Saturday, July 2, 2016, The Christina Gallery opened the 2016 Summer Exhibition with an artists’ reception for William R. Davis, Lloyd Kelly and Marjorie Mason. The gallery is celebrating 20th anniversaries with both Davis and Kelly who joined the gallery in 1996. Marjorie Mason, who has been with the gallery for many years as well, is also part of the season celebration with her recent collection of paintings of Martha’s Vineyard.

END_OF_DOCUMENT_TOKEN_TO_BE_REPLACED 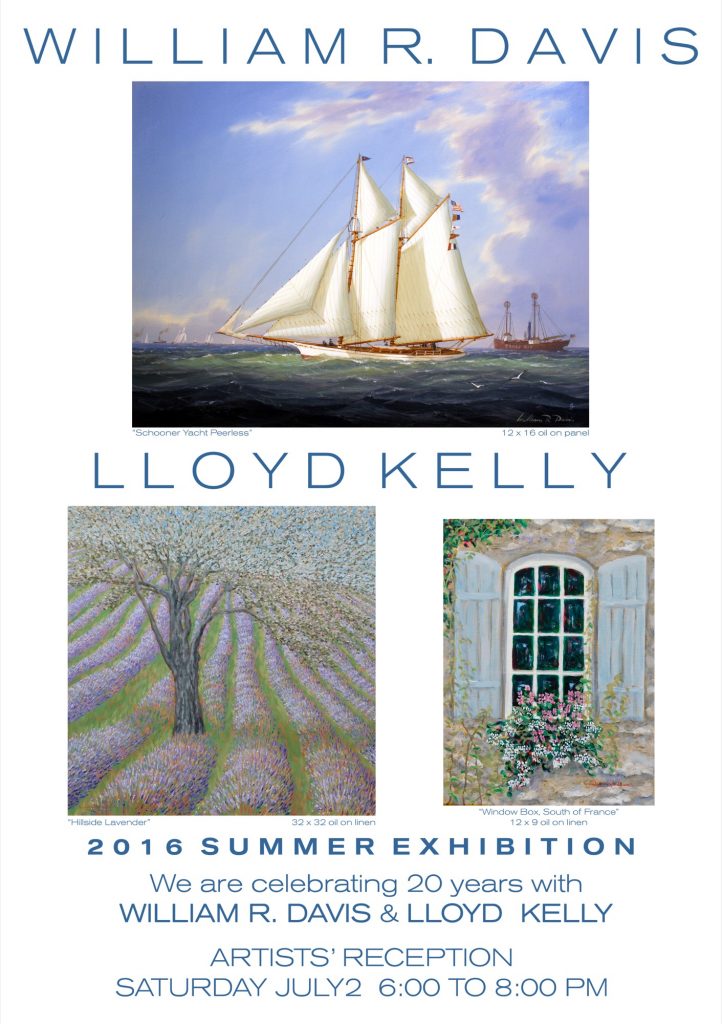 It’s finally starting to feel like summer here on the Vineyard and with the season upon us, The Christina Gallery is very excited to announce details about our 2016 Summer Exhibition with William R. Davis and Lloyd Kelly. Both Bill and Lloyd have been with our gallery for twenty years so we are celebrating this milestone with an artists’ reception on Saturday July 2, 2016 from 6:00 to 8:00 pm. There will be soft music and light refreshments.

My mother, Liz and I first met Bill Davis when we visited his studio on the Cape back in the mid 1990’s. Not only did he display his work but also many antique paintings, which he and his wife, Judy, had a fondness for collecting. Almost instantly, Bill’s masterful marine paintings were a success with our clientele.

END_OF_DOCUMENT_TOKEN_TO_BE_REPLACED

Au revoir 2015, Bonjour 2016! With 2015 now behind us, we find ourselves reflecting on the past year and how fortunate we are for being both healthy and happy. It was an exciting year for many of the artists who experienced steady sales and the exhibitions with Lillia Frantin and Marjorie Mason were very well received. We are looking forward to next season with the hope that this positive sales trend will continue for all of the artists.

In November, I traveled to France with my sister, Catherine. We were in Paris when the attacks took place and although we were not in harm’s way, it was an unsettling experience – one that I personally will not forget anytime soon. Paris is such a beautiful and vibrant city and I hope to make it back there soon.

END_OF_DOCUMENT_TOKEN_TO_BE_REPLACED

Every time I speak about the marine paintings by William R. Davis, I point out that he is a self-taught artist. As I am saying the words and looking at his paintings, I say to myself ‘that cannot be’, but it is true. Davis was born in 1952 in Somerville, Massachusetts, and grew up near the shore in Hyannis where he enjoyed a love of sailing that still is with him today. He has spent much time studying the works of the 19th century masters and has amassed an impressive library that he references to achieve historical integrity in his paintings.

Over the nearly twenty years that we have represented his work, I have most enjoyed Davis’ attention to detail, regardless of the size of the painting. To me there are little paintings within the larger one. Clients and those new to his work have also marveled at his detail.

END_OF_DOCUMENT_TOKEN_TO_BE_REPLACED

William R. Davis has made his name as a painter of historic sea and landscapes. Known as one of the best marine painters of our time, Davis is a self-taught artist who learned to paint by studying the works of 19th century masters. Francis Silva’s works showed Davis that warm tones are pleasing to the eye, while astute observation of William Bradford’s paintings led to Davis’ technique of priming his canvas in salmon hues. The salmon under-painting results in the warm glow that marks each of Davis’ oil paintings.

Davis was born in 1952 in Somerville, MA and grew up near the water in Hyannis where he developed a love of sailing that would last a lifetime. He has amassed a library of over one thousand texts on marine artists, historic vessels, maritime charts, and other boating related books. He thoroughly researches each landscape in order to recreate its 19th century appearance. Davis uses a gentle hand and a soft sable brush to create his carefully rendered oil paintings. His works are defined by their warm color palette, impeccably detailed subject matter, smooth surface, and atmospheric lighting. Renowned for his ability to accurately portray the billowing sheets and taught lines of a schooner, he is also unmatched in his ability to emulate the quality of light in a dewy sunrise or a pink-tinged sunset. His perceptive appreciation of light allows him to capture the power of nature in every painting. Collectors of Davis’ art praise the elegant way his brushstrokes melt into the surface of the canvas and the accuracy with which he captures the turn-of-the-century seascapes.

William R. Davis’ work is reminiscent of the American Luminism of the late eighteen hundreds. The style is defined by the use of natural light, often sunrise or sunset, in the paintings of American landscapes. Davis’ work can be found in collections and exhibitions around the world, including at The Christina Gallery in Edgartown, Martha’s Vineyard.