Jan Pawlowski is known internationally for his impressionist seascapes, landscapes and city scenes. Sunday the 24th of July marked the opening of the Polish artist’s one man show here at The Christina Gallery. Pawlowski has been a frequent visitor to Martha’s Vineyard since joining the gallery in 1996.

This exhibition of his work highlights these visits as he displays views of the island. The paintings displayed in the show demonstrate Pawlowski’s confident and quick brushstrokes as well as his sensitive understanding of color and form. Pawlowski’s followers appreciate his bright and serene palette.

Paintings such as “June Afternoon, Edgartown Yacht Club” capture the essence of the Vineyard. A light wind blows causing the American flag to flutter in the wind and a cluster of sailboats breeze by in the distance. Pawlowski manipulates the oil paint masterfully, transforming a few simple brushstrokes into light and fluffy clouds gracing the otherwise clear afternoon sky.

Jan Pawlowski paints en plein air or ‘in the open air.’ This technique of painting was advocated by the Impressionists of the late 19th century. In 1841 tubes of paint were invented, allowing artists to easily transport their materials and paint from life wherever they were inspired. Prior to this invention, artists and their assistants hand ground pigments and produced their own paints. Many art historians and critics credit the creation of tubes of paint for the development of Impressionism for it was the ease of movement that allowed artists to paint outdoors. Pawlowski embraces this technique and can often be found along the beaches and waterfronts of Martha’s Vineyard capturing the jovial atmosphere of the island with his expressive brushstrokes and pleasing palette.

Pawlowski has been recognized for his oeuvre of artwork by the Polish government; in 1979 he was awarded the highest honor given, called “Authorization and Certification.” His work was also in the collection of Pope John Paul II.

Often made of Spanish cedar, Sailors’ Valentines are octagonal shaped boxes, lined with fabric and filled with intricate geometric patterns of colored seashells. These works, originally called ‘Fancy Work’ are native to Barbados. Locals used thirty-five types of indigenous shells to form their elaborate designs. Sailors travelling to the area from England and America would purchase the mementos in port to bring home to their loved ones. The colloquial name ‘Sailors’ Valentine’ was inspired by the sentimental messages, such as “Truly Thine,” that were occasionally worked into the shell mosaic.

Sandi Blanda is a folk artist currently living in Plymouth, MA. Blanda uses only naturally colored shells to create her contemporary versions of the Victorian era’s Sailors’ Valentines. She was captivated by the romantic folktale (though untrue) that sailors created these mementos themselves while out at sea. Inspired by the notion that such ornate objects were created for loved ones, and her personal love of flowers, Blanda sought out to produce her own iteration of the Sailors’ Valentine. She remains true to the tradition, working shells within octagonal wooden boxes. Some of these cases are hinged so when closed they take the form of unassuming simple boxes, but when opened they reveal intricate and colorful designs. This was very common amongst the Victorian Sailors’ Valentines because it protected the shell work while the sailors were at sea. Blanda’s sophisticated creations can take up to four months to complete due to their precise and meticulous nature. These precious artworks are treasured by generations as they are passed down within families.

Last evening The Christina Gallery participated in an “Evening of Fine Art,” the first of three gallery strolls of the summer 2011 season. From 6 – 8pm visitors enjoyed the art and refreshments at four of North Water Street’s fine art galleries. The Christina Gallery opened its doors to the public along with Eisenhauer Gallery, North Water Gallery, and Willoughby Fine Art Gallery. At The Christina Gallery works by John C. Traynor were featured as part of the “Favorite Places” exhibition that is currently on view. The collection of four generations of the Camille Pissarro family was also very well received with many people viewing the family tree with the works which were on display.

Visitors also enjoyed our extensive collection of antique maps and nautical charts. Proving to be exceptionally popular were our maps of Martha’s Vineyard dating back to the 18th century. If you dropped by our gallery during the gallery stroll we hope you will check out our Facebook page and let us know what you thought of the evening! 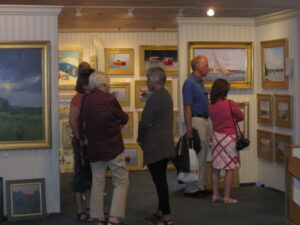 Camille Pissarro (1830 – 1903) is frequently referred to as the patriarch of the Impressionist movement. Pissarro moved from his birthplace of St. Thomas to Caracas in 1852, and after this taste of independence from his family’s bourgeois life, returned to Paris (where he had studied as a boy) in 1855 to begin his life as an artist. Pissarro’s artistic talents were apparent from an early age, yet he increasingly grew to dislike the aesthetic canon revered by the Salons of Paris. Pissarro embraced the technical act of painting [and printmaking] and enjoyed the freedom and possibility that the paintbrush allowed him. He eliminated historical and sentimental associations from his artwork and instead focused on the quality of light and the modeling of form. Academies and the Salon that presided over the respected artistic world of Europe did not share this viewpoint. Instead they admired the artist whose work captured the likeness of the subject matter while not revealing the artist’s hand or the mark of the brush. A passionate brushstroke was seen as a weakness. Pissarro, along with his like-minded contemporaries including Monet, Renoir, Degas, Sisley and Morisot, organized their own exhibition of Impressionist works separate from the exhibitions hosted by the Salon. This exhibition was held in 1874 and was the first of eight independent Impressionist shows.

Throughout his life, Pissarro remained committed to his artistic ideals which were adopted by his children and future generations of artists. He was the only artist to exhibit works in all eight of the independent exhibitions, demonstrating his support of the younger generations of Impressionist artists. All of Camille Pissarro’s children were encouraged to draw frequently and four of his seven sons became well-established artists in their own right.

Pissarro produced engravings for his own enjoyment; he did not seek to sell them and as such they are often printed on small or unrefined pieces of paper. Despite this amateur attitude towards the medium of printmaking, Pissarro was to become a master in aquatint later in his career. His Femme a la Barriere (1889) combined both drypoint and aquatint and is a prime example of the varied techniques with which Pissarro experimented. He was known for remaining open minded about methods of artistic expression and embraced many styles within his works. The print is of a woman opening a garden gate. Varied lines capture the texture of the woman’s bustling skirt, the leaves of a bush blowing in the breeze, and the fine detail of the thatched roof cottage in the background. Pissarro’s prints reveal his private thought process and layers of preparation that lie behind each of his oil paintings.

Last Friday evening, July 1st, the gallery filled with visitors to celebrate the opening of our most recent show and to kick-start the summer season. “Favorite Places” is an exhibition of oil paintings by John Traynor that depict his favorite places from his travels. Locations shown include Paris, Venice, Martha’s Vineyard, and his own backyard in southern New Hampshire. John Traynor is a contemporary New Hampshire-based artist who paints landscapes and marine scenes with a remarkable sensitivity to light.

As Traynor says, “I want to share what I see with the viewer, the spontaneity, the structure and the beauty of what is all around us.” This honest approach to painting has resulted in over two hundred awards recognizing Traynor. In November 2010 he was the recipient of the prestigious Salmagundi Club’s highest award, The Salmagundi Club Medal of Honor and Merit, for his artistic achievements and contributions to the field of art.At the opening guests mingled with John and his wife Sara while enjoying the art. Visitors heard stories of John’s travels ranging from the grassy meadows of Ireland to the New England countryside that corresponded with the paintings on view. John often paints outdoors on location, a fact that is immediately apparent in his rendering of color and form. He has been recognized as a Copley Master by the Copley Society of Boston, the oldest non-profit art association in this country. His work is part of over one thousand public and private collections around the United States.

The summer season is in full force on Martha’s Vineyard following the Fourth of July weekend. We currently have over 30 artists on display at The Christina Gallery as well as our antique collection of charts and maps. Stop by our gallery at 32 North Water Street, Edgartown to see the exhibition for yourself or flip through our online selection of works by Traynor here.