Last night’s reception of Lloyd Kelly’s “Paintings of Provence” coincided with the first Gallery Stroll of Summer 2012. The gallery was filled with visitors from all sides of the island. Guests enjoyed drinks and conversation while looking at paintings by artists such as William Davis, John Traynor, Russell Gordon, Lillia Frantin and four generations of the Pissarro family.

After viewing “Paintings of Provence,” I was able to enjoy a conversation with the artist Lloyd Kelly. He talked candidly about his inspiration for the show, his approach to painting in general, and his interest in the Far East. – Erica Udow, Gallery Associate, The Christina Gallery

An Interview with Lloyd:

The theme of this exhibition is Provence, France. Many artists in history have embraced this subject. What inspired you to continue the tradition?

“Impressionists called themselves Japanesists because they were so influenced by the Japanese. The South of France is inspirational because of the food, the wine…magic light there. It is still a big influence on artists today. There is such diversity of landscape; nature is so present. It energizes the artist and inspires…”

Speaking of inspiration, you have spoken of the influence the eighteenth century Japanese artist Ito Jakuchu has had on your work. How did that develop?

“First of all through textbooks and also through my interest in martial arts and Tai Chi starting as a child. My father was in the military and travelled to Japan. Because of things that my father brought back, I started becoming more and more interested in China and Japan.”

What about Jakuchu’s work appeals to you?

“The specific influence of Ito is that he incorporates asymmetric balance that for the time was very unique. He really is arguably one of the greatest artists of all time.”

Are there other artists whose work you find to be particularly influential?

“Do you know the artist Morandi? Giorgio Morandi was from Bologna. He was very influential on people like Rothko. You name the big artist and they were all looking towards Morandi. He has always been an artist’s artist. He takes very simple objects that are conventional so that [the object], be it landscape or still life, is not about the subject matter at all, it just becomes a way into the subject matter.”

In “Arts & Ideas” you mention that your work is abstract and not only about the obvious subject matter of the painting. Is Morandi’s approach what you are referring to?”

I read about your use of bourbon as paint thinner in a series of equestrian portraits you painted a few years ago. Have you continued to use this technique in your recent works, or was that an one-off experiment?

“I use lavender oil in the paint. Sometimes, in fact, the UPS people will ask ‘what is this I have in my truck!’ Spike of lavender was used during the Renaissance… It causes the paint to flow. It slows down the drying and one can really draw with the paint. I use it in small passages, often in the lavender blossoms themselves. I sometimes use bourbon or cognac or calvados. I go to the distilleries and they give me the designate, which is completely clear, and does not contain the chemicals and tannins and so forth. It disperses the pigments differently than chemical mediums.”

How did you come up with the idea to use unconventional mediums?

“After school I [completed coursework in] Museum Studies at The Louvre and The Tate. I collected [indigenous materials]. I think it is fun. I think it’s interesting. There’s some sort of an authenticity to it. It is kind of like living off the land. I think that the source is from my museum education at the Louvre.”

Your oil paintings demonstrate an adept ability to manipulate color…

“You can only get about 170 colors [readymade from an art store]. The human eye, untrained, can see up to 700 with no problem. With a little training [it] can see up to a few thousand. The interaction of colors is something that interests me a lot. That is why I do so much under painting. The viewer’s eye mixes the colors. The colors that I mix are [just the first step in creating the final product]. The viewer’s eye brings it together to another place.” 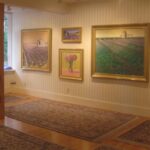 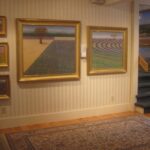 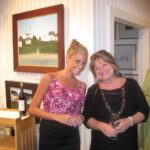 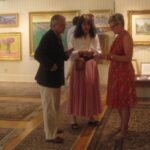