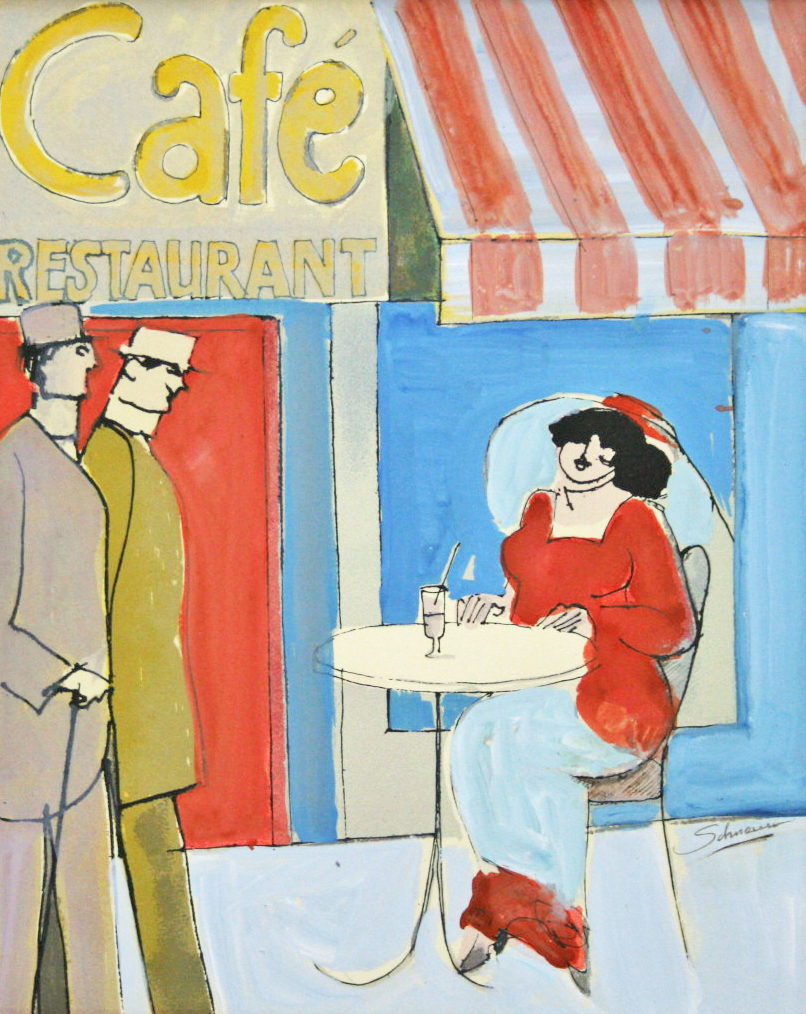 Although he lived in Israel for the rest of his life, in his imagination, he returned to the carefree stylish Parisian world that had first inspired him. His works have a relaxed, raffish charm that is indicative of Toulouse-Lautrec.

David Schneuer was born in 1905 in Przemisle, Poland (formerly Austria-Hungary). His family intended to immigrate to America in 1907, but a delay in Hamburg interrupted their plan. Eventually, they settled in Munich where David grew up with his six sisters and brothers.

At the age of 19, Schneuer graduated from Munchner Kunstgewerbeschule (Munich School of Arts and Crafts) and then he spent six months in Paris. He lived in Montparnasse and filled his days drawing, painting and wandering around. His time there influenced him greatly, leaving a lasting impression on his painting.

Between 1927 and 1932 Schneuer lived and worked in Munich as a poster painter for the Kammerspiele in Schauspiellaus. In 1930 he began to design stage sets for the theater, as well as, posters for the shows. He worked with one of the most renowned German set designers, Otto Falckenberg through whom his artistic sensibility matured.

In 1932, Schneuer was arrested and imprisoned in Dachau. Upon his release, two months later in 1933, he fled to Tel Aviv, where he worked as a graphic designer for various advertising agencies. A grant allowed him to move to Jerusalem for a year where he took lessons at the Bezalel Art Academy. He would return to Tel Aviv in 1939 and continue with graphic work. He collaborated with architects and interior designers decorating walls of bars, cafes, restaurants, and hotels. During this time, he was also working in his home studio on his paintings. His fond memories of Munich and Paris inspired this work.

In his work, Schneuer depicted sensuous characters and exuberant humor of modern life in the city and nightlife. His grey-toned color palette and his usage of a dark black outline was a style that drew on the European interest in Japanese printmaking.

Although he lived in Israel for the rest of his life, in his imagination, he returned to the carefree stylish Parisian world that had first inspired him. His works have a relaxed, raffish charm that is indicative of Toulouse-Lautrec.

Unaffected by the ever-changing world about him, Schneuer continued to develop his expressionist style until his death in November 1988. He painted until the last day of his life.